The former alleged criminal Russell has become the new Sinnoh League Champion. He defeated the beloved Cynthia in a close and heated match. His Pokémon seemed quite under leveled compared to Cynthia's and the region is in shock at news of her defeat. He probably cheated. 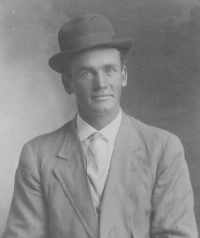 The real Russell was another one of my Great Great Grandfathers. Unlike the other Great Great Grandfathers I have feature this one did not emigrate to Utah early in life. Instead he was born and raised there. He died in the same city he was born in, Fillmore Utah. He was born in 1887. From what I can find he was quite patriotic! He participated on Fillmore's Fourth of July decoration committee. All of the surviving journal entries and letters of his I was able to find and read seemed to be about his daughters, which I found quite beautiful! In this case the real Russell in no way inspired the story of the fictional Pokémon world version. To my knowledge the real Russell was never suspect of being a criminal.

Russell died young, shortly after his 28th birthday. In the Summer of 1915, him and some of the men he worked with decided to go to the local spring for a swim to cool off after working in the fields cutting grain. after swimming for a while Russell decided he wanted to swim across the spring. Perhaps he misjudged the distance or his own ability to swim that far but when he reached about halfway he likely grew fatigued and decided to try to swim back. he was nearly back when he went under. the men on the shore tried to save him, but by the time they got him out of the water and got the water out of his lungs he had already suffered from the prolonged loss of air and they were not able to revitalize him. I was able to find a newspaper report of his drowning, but have decided not to link it to be respectful of my family that may consider that disrespectful. He left two daughters and a widow, Bertha. Bertha eventually moved to Los Angeles in California where 20 years later she got remarried to my Step Great Great Grandfather Daniel.
Posted by Tanner J at 10:40 AM