This just in! This just in! We have Breaking News directly from the Indigo Plateau! Not one, but two boys from Pallet Town have defeated the Elite Four of the Indigo League! After their near parallel rise to the top Blue and Chuck engaged in battle to decide once and for all who would be named the Indigo League's new Champion! First, Chuck's Jolteon defeated Blue's Pidgeot, then his Parasect defeated both Blue's Alakazam and Rhyhorn. Blue's Arcanine was able to exact revenge on Parasect for his fallen comrades and knocked out Chuck's Persian before being defeated by Nidoqueen. Blue embarrassed Chuck's Nidoqueen with his Exeggutor before burning out against Charizard's flames! Chucks Charizard's flame didn't burn long as Blue's ace Blastoise dosed it. Chuck's Jolteon returned to the fray to finish the job zapping Blue's final Pokémon out of the battle and claiming victory for his trainer, Chuck the new entrant to the Hall of Fame and Indigo League Champion! We have footage from their battle:


Who is Chuck? From Pallet town the 11 year old is an aspiring scientist with goals of making the world safer for Human Pokémon interaction. On his Pokémon journey he assisted the authorities in dealing with the notorious Rocket Gang, confirmed the existence of the legendary elemental bird trio, and assisted scientists with fossil research at Cinnabar Labs. Since being named Champion he even captured the Monstrosity Mewtwo: https://www.youtube.com/watch?v=FmcE-HyxGXs

The real Chuck (or Charles as was his given name) was born in Utah in 1908 and lived there his whole life working as a farmer until he passed away at 51. He is my Great Grandfather and one day soon I will ask my Grandma to tell me a story or two about him that I can share! I know he was a good man, and I am grateful to be his descendant. 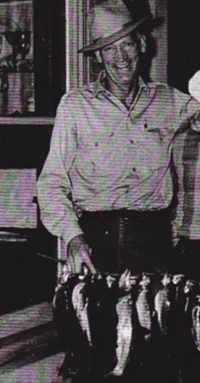