Mark belonged. He belonged with his Pokémon and in Unova and with his family and so many other places. He always had, he just could not see that for a little while. Now that he had defeated the new Team Plasma that belonging was no longer threatened, and now that he was the Unova champion he had no reason not to return home and enjoy the company of those he really belonged with. 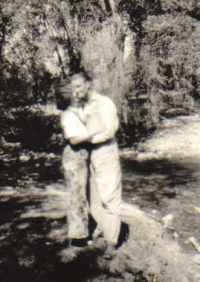 The real Mark was my great grandfather. I have never heard my Grandma say a negative word about her father, and she loves to talk about him. She had stories upon stories about how good of a father he was, about how handsome he was, about his kindness, etc. Mark was born in 1905 and like many of my ansectors lived nearly his entire life in Utah. He lived in Kanosh Utah to be more specific. He got married when he was 25. Mark died fairly young at only 60 years. Because he is only one generation removed I will soon call my Grandma and ask her to share with me briefly about his life for one of the podcast episodes. Pictured on the left is him with his sweetheart Nina, the second namesake (coming up in a few games) that I actually had the chance to meet in my lifetime.
Posted by Tanner J at 10:36 PM