After defeating the Pokémon League's Elite Four and pursuing N into his Castle Brigham ran once again into his father. This confrontation was much different than their last encounter had been. Brigham's father confessed to his son that shortly after joining Team Plasma N had entrusted a Pokémon to his care and for him to use in his work to liberate Pokémon. But now that Team Plasma's plans were successful he was dreading the thought of having to once again say goodbye to his Pokémon friends. He felt this new Pokémon loved him as much as he loved her. Working alongside the small creature had made him doubt all that Team Plasma stood for. Brigham encouraged his father to keep his new Pokémon friend and stressed that they would always be welcome family to him. Brigham then went on to confront N and after a battle N admitted he felt swayed to allow trainers to keep their Pokémon, his heart was changed seeing the mutual love and affection between Brigham and his Pokémon. 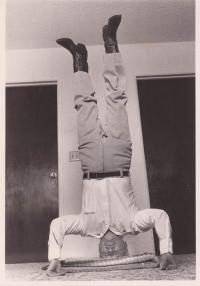 The real Brigham was my Great Grandfather. He was born and raised in Utah and like many of my ancestors served a religious mission in his youth. He registered for the draft of both world wars. The stand out attribute that he was known for in his old age was his vitality. At 80 he decided to learn how to water ski, and when he was 81 a local paper published a story about how active he was. He lived a long life passing away at 89.
Posted by Tanner J at 10:45 PM