Whit has completed his many goals and seen the world! And with his diverse family of Pokémon he would never feel confined to New Bark Town again. However, after his travels and reaching his goal of becoming the Pokémon Champion relaxing in New Bark Town sounded nice. 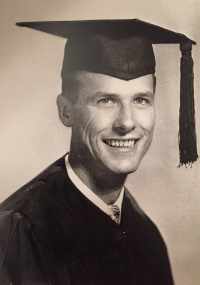 Whit is my late Grandfather. The first namesake for this project that I knew personally. Grandpa Whit was great. He had 11 children, 9 boys and 2 girls. He would frequently tell both friends and complete strangers about how all 9 of his sons were Boy Scouts of America Eagle Scouts. He served in the Navy during the tail end of World War II and return to serving there for a year afterwards. He was a true Christian both in belief and action. He filled his life with service to his fellow brothers and sisters including a 2 and 1 half year mission to Denmark, the home of our ancestors. He was very proud of being able to speak Danish, and I think he might have been a little disappointed that only 1 of his children ever learned Danish. I am a guilty party there, never learning the language myself. Grandpa Whit worked as a Mathmatician, Statistician, and with some of the earliest computers. Much of his career he worked in education. At this juncture where I am considering graduate school in similar fields I feel a certain extra kinship towards him. This is why I included a picture of him from his Masters Program Graduation. I think I might want that too.

He lived the second half of his life on the Upper Peninsula of Michigan. There his favorite store was Menards. He would buy just about anything there if it was on sale or he had a rebate. Because of this anytime we visited him and my Grandma each grandkid could go pick one item out of his Menards box. Usually it was just a bunch of pens, highlights, and measuring tapes but every once in a while there was something really neat in there. One visit I grabbed a screwdriver with over 20 different bits. I was so excited to get something so substantial from the box and he was happy to tell me all about how cool that screwdriver would be for helping my Dad with chores around the house. My Dad definitely used the screwdriver more than I did, but it is still a fun memory for me.

There are so many fun memories I could share about this good man. He made me laugh regularly and was always keeping himself busy. Once I called him after my dad teased me for spilling milk on my shirt at dinner. Seeking retribution 15 year old me asked Grandpa Whit, "Did my Dad have a drinking problem when he was my age?" mortified he quickly shouted out for his wife and my Grandma. I definitely could have worded my question much better, but afterwards that experience gave me a great laugh (for those keeping score, according to Grandma my father never spilled anything ever on himself). It will be cliche to my siblings and many cousins but my favorite memory of Grandpa Whit has to be watching him count the fingers of strangers. His favorite trick was to count people's fingers in a way that totaled eleven eleven fingers to see if they could understand the trick. He would do this with everyone: the clerk at the store, the server at a restaurant, people at a park, his doctor, kids at church, friends he had not seen for years, everyone! If I have time tomorrow I will record of a video of me doing the trick and you can tell me if you can figure it out.

As you can see I have a lot to say about my Grandfather. I think he was wonderful, and I wish I could have known him more. He was and is one of many lights in my life! Love you Grandpa Whit!
Posted by Tanner J at 9:46 PM