Christine wasn't really disappointed when AZ crashed her league champion parade, she was just confused. Why was he here and why did security let him in. Why did he get to challenge her, the champion, despite not having a gym badge to his name. It was strange, but no less unusual than her friends joining her in the parade. Regardless, Christine was the champion and finally felt at home in Kalos! 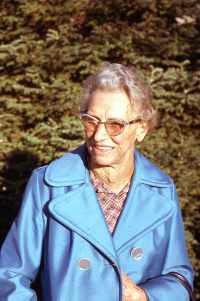 The real Christine is my Grandpa Whit's mother and the daughter of Hans. She went by Lucy and was born in Utah in 1890 and lived to the healthy age of 88. She grew up on and worked on a fruit farm throughout her life. She was married in her mid-twenties and had 5 children. Her third child died from an appendicitis infection at the age of 7. From everything I have heard this tragedy had a significant impact on Lucy and she was never quite the same afterwards. It was after this terrible tragedy that she bonded with my grandpa Whit, who was only 4 or 5 at the time. Even after he grew to adulthood he could do no wrong in his mother's eyes. My grandpa and entire family always spoke quite highly of my great grandmother. She seemed to be an overall happy woman.
Posted by Tanner J at 11:30 PM