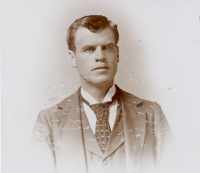 Edward was the name of my protagonist back in game 3, Pokémon Ruby. Due to being sick at the time of finishing that game I did not write a proper piece memorializing that character's namesake. I now have time to correct my error.

The real Edward, my great great grandmother and father of Mark, was born in 1868 or the early days of the Utah Territory. He was delivered by his grandmother. He was a sickly child for the better part of the first two years of his life. His mother once told him that a mysterious angelic messenger had visited her and told her the secret actions that would heal him and that only after she had met with him and obeyed his counsel did Edward begin to grow. He believed this messenger to be one of the 3 Nephites of Mormon folklore.

Edward was a very curious and entrepreneurial child. When he was young he was often seeking to trade or work for something new and exciting to play with. When Edward was only 4 his father, George, passed away. George's dying words to his son were: "My Boy, I want you to lead a clean life and always honor God." Edward never forgot those words and modeled his entire life after that admonition.

During his young years Edward worked his first job herding sheep. This was his first experience living away from home and it took him quite a while to get over his feelings of homesickness. He later worked herding cattle, which seems to me to be a reasonable progression from shepherd to cowboy. He also worked other jobs. He worked for a shopkeeper. He was also a mail deliveryman (his least liked job).

Edward served a mission for the Brighamite branch of the Mormon church. He traveled throughout the South of the United States preaching the message of Jesus Christ and about the church as restored and established by Joseph Smith.

Edward's primary trade in life as an adult was working as a farmer and spent most of his time working hard in the fields. When he could be away from the fields he spent nearly all of his time with his family as they were truly the light of his life. His autobiography is littered with tales and anecdotes from the time he spent with his family and children. He had 8 children, though only 6 grew to adulthood. His eldest son Golden died of the flu at 19 years old when he was in Salt Lake city seeking to enlist in the Great War. And his daughter Della had a weak heart.She was sick and weak her whole life and died young at only 9 years old. The premature deaths of his children truly broke Edward's heart.

In his older years Edward went to work volunteering in the Utah temples. He loved his time there helping others be close to God as he worked to bring himself closer too.

Edward lived to 81 years old. The Mormon Apostle Gordon B. Hinkley spoke at his funeral and the words he spoke of my great great grandfather proved he absolutely lived his life according to his father's dying instruction.

Linked here is his autobiography as anotated by his son (My Great Uncle) Spencer.
Posted by Tanner J at 9:35 PM