Forest had done what he set out to do, and he was satisfied. He had become Kanto's greatest Pokémon trainer. He had not let anything stop him since his initial standoff against his childhood friend Blue. Not the Rocket Gang, nor Professor Oak's Pokédex project.

The real Forest is a Great Great Grandfather on my father's side. Unlike so many of my protagonist namesake family members he was not born in Utah, but in Georgia. However, his life's concluding years were in Utah.

First was born at the beginning of the year in 1867. In his youth and young adulthood he worked hard to save money. By age 26 he had saved $500, a hefty sum in that day (about $14,000 in 2020). He used those savings to open a small storefront and that venture eventually led to him blacksmithing. Forest was always an entrepreneur at heart, although he consistently supported his family through farming. 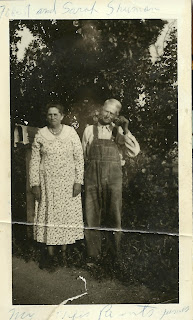 In 1908 Forest lead his family in converting to Mormonism. That decision impacted the rest of Forest's life.  It sparked a curiosity in him about the west that had his family move between Georgia and the Rocky Mountain corridor multiple times before selling in Utah. Though originally enthusiastic about Mormondom, Forest was regularly disappointed in how unchristian his fellow saints treated him and others and at the end of his life he had stopped worshipping with his congregation.

His happiest times once he was old were when he was visiting his family back in Georgia. Late in life Forest took up bee keeping, which he thoroughly enjoyed. He was a good man and perhaps his greatest flaw was trusting others too much. He passed away in 1934, having worn his body out over the hard works of his life.
Posted by Tanner J at 11:27 PM